Q&A: What decisions have shaped who you are today? 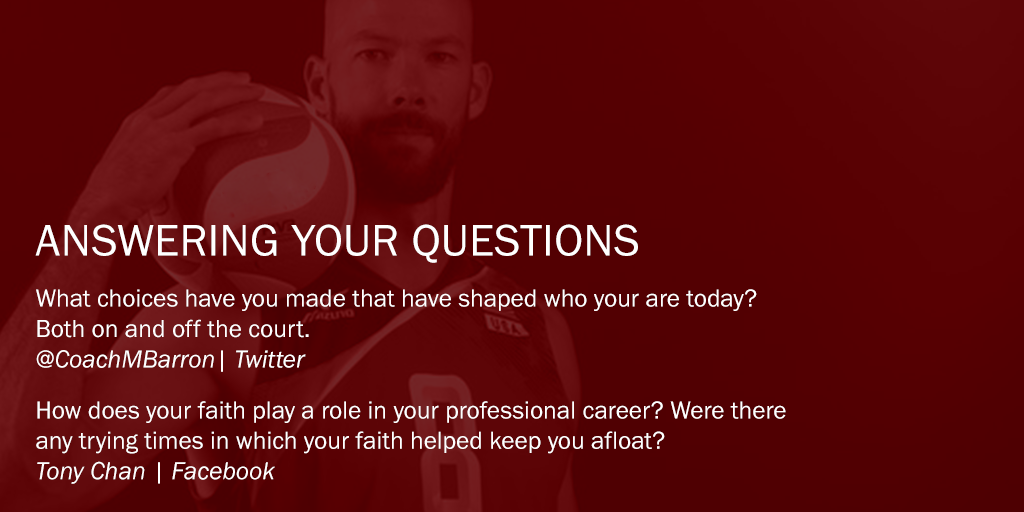 What choices have you made that have shaped who you are today, both on and off the court (with emphasis on off)?

How does your faith play a role in your professional career?  Where there any trying times in which your faith helped keep you afloat?

Hi Coach Barron and Tony Chan!  Thanks so much for your questions and patience.  This post answers both of your questions so it made sense to group them together.

Before getting to the question of decisions I have made, there were some very big influences in my life that weren’t by choice. Namely, which family I was born into. My parents have had an immense impact on who I am today, definitely in more ways than I can list here.  Certainly, their love and care are foundational but also in the stability they provided (and still provide) in their consistency of love, life, and marriage.  They have been anchors for me and I couldn’t answer this question without starting there first.

One extremely impactful moment for me came after the 2004 Olympic Games in Athens, Greece.  We had an emotionally charged couple of weeks that had some really high highs and finished with some low lows.  Up to that point, being that my parents had zero exposure to volleyball until I started playing, their support was simply that: support.  No “X’s and O’s” talk, strategic or technical help, but simply support. They were there at the matches rooting me on.

However, after those Games, my dad wrote me a very long message that was part diagnostic, part strategic, and an all around incredible synopsis of what happened, why, and where to go from here.  It was amazing and it was credible!  The words were great and provided context and encouragement but more than that, it showed me that he had been engaged this whole time.  Quietly studying a game he never played, intently observing the intricacies of the sport and the dynamics of the players and teams.  It was a tremendous display of love that summarizes what both my mom and my dad have provided these 4 decades to me and my sisters.

On a personal level, the biggest decision I’ve made was in answering the question, “is there a God, and if so, can He be known?”  I have determined that the answer is “yes”, and try to live each day in that reality.  Now, I understand and appreciate that this blog is NOT a place where I intend to leverage my position for any particular belief or religion.  I want to see volleyball grow, and in partnership WITH YOU, I am convinced we can make a difference.

I want you to know that this isn’t a bait and switch where you thought you were getting volleyball content and here I am talking about my faith.  I respect each of you and appreciate that we are connected in a meaningful way. Rest assured that I will always respect you and your beliefs and am not sharing this looking for a bunch of “Amens” from like-minded people and a lot of “Boo’s” from those of you with differing points of view telling me to “stick to spiking balls and get off your soap box”.  However, at the same time, I believe deep and meaningful relationships happen in environments of honesty and authenticity.  I am simply answering a question in the best, most honest way possible. In fact, I specifically left a large chunk of my personal story out of my first book, Max Potential Playbook, to be sensitive to this very issue. I plan to write that story in depth eventually, but will allow it to be a stand alone piece so that if you have the inclination and desire to learn about that part of my life (which is a huge part of who I am and how I process development, growth, and performance on and off the court), you can make that choice and read that piece or make the choice NOT to read it.  I want that to be your decision.

So, back to the question Barron, that was an important decision in shaping who I am today, not only from an eternal perspective according to my beliefs, but also because it provides a clear framework for a greater plan and purpose which has direct impact on how I operate on a day in and day out basis both on and off the court.  I found that the truths in the Bible were quite synonymous with what I was learning and being challenged with on the court.  The key point being character development, continual growth, and maturity personally while learning to live and work with others in view, growing in love.

In fact, in Rio, I didn’t take my Bible, I only photocopied the book of Philippians which was a letter written in the first century by a Roman citizen/Jewish zealot turned evangelist to a group of people in Philippi (Greece).  I poured through that little letter and found tremendous inspiration throughout my time in Rio and beyond.  First and foremost, Paul was writing this uplifting message from a prison cell where he would say “I can do all things through Him who gives me strength” (one of the most quoted verses of the bible, especially at sporting events). But what is often missed is that he isn’t saying this from a victorious position with a Gold Medal around his neck. He was in captivity, under lock and key.  What isn’t quoted often is what he says just before.  “I know what it is to have need, and I know what it is to have plenty.  I have learned the secret of being content in any and every situation, whether well fed or hungry, whether living in plenty or in want. I can do everything through Him who gives me strength.”

To m, this describes what every athlete and person wants to have: peace and contentment. It illustrates what it means to be clutch and “in the moment”.  Total peace of mind and not consumed with current circumstance or outcomes. What amazing words of encouragement in a time when I needed it!  And who doesn’t want to know contentment in any given situation.  There were dozens of ways that this little letter had massive impact on me personally.  It talks about mindset, determination, and even the central theme of the message that Paul was conveying to the small group of people in Greece ran right alongside what John Speraw’s mantra was for our team during the final push leading through Rio.  John wanted us to play tough and together.  At the end of the first section of this letter, Paul the prisoner encourages his friends to stick together without fear no matter what happens.  I drew so much inspiration from this letter that had application for me both on and off the court.

Barron and Tony, my goal as a person is to pursue meaning, have an impact and live consistently.  I don’t want to compartmentalize my life in any way but rather pursue synchronicity in all areas of my life, as an athlete, as a husband and father, and as a friend.  So answering, or better, attempting to answer, the BIG questions of life helps shape who I am today.